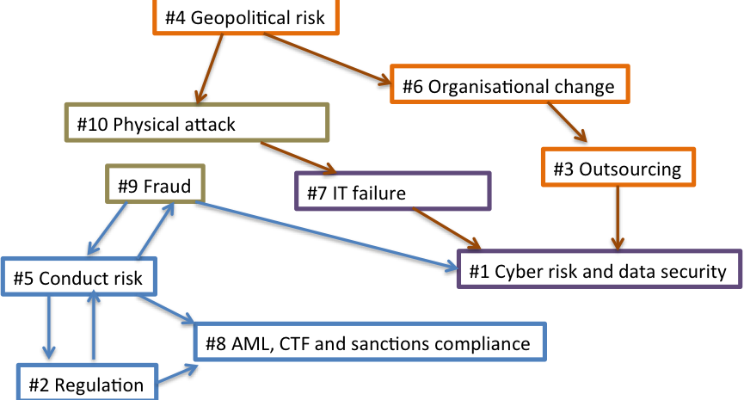 Risk.net published yesterday the results of its top risks survey for 2017. Compared to 2016, geopolitical risks comprising mostly the worries and threats felt following the yes referendum to Brexit and the election of Donald Trump is the big entry of the year in fourth position, whilst Cyber risk remains unsurprisingly in pole position and the risk of physical attacks, last year referred to as terrorism risk, sadly confirms its place within the top ten concerns of the year to come.

Interesting findings come up when we start representing these risks into a network rather than a list: when highlighting the possible causal relationship between them, such as in the picture of these blog, it appears that:

This diagram is my own, based on my personal opinion and experience working in risk management in the financial sector for over 15 years. Others will have other judgments. However, what this is approach highlight, is the benefit of representing a risk register as a network rather than a list, to highlight their connectivity and prioritise mitigation.